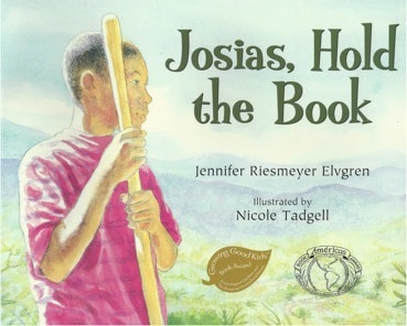 Summary
Every morning Josias is hard at work in the family’s garden under the hot Haitian sun. And every morning he sees his friend Chrislove walk to school. “When will you join us to hold the book?” asks Chrislove. But Josias has a garden to tend and no time to learn to read and write, especially now that the garden is failing. Josias can’t figure out why the beans aren’t growing. Without beans, there may not be enough food for his family. He tries giving the beans more water. He tries working more fertilizer in the soil. Still the garden shows no sign of life. One morning, when Chrislove asks again when his friend plans to come to school, Josias wonders if a book might hold the solution to his problem.

March 2006 and January 2011, Boyds Mills Press. Ages 7 and up. ISBN:978-1590788561
Reviews
“Elvgren’s delightful story about a boy’s discovery of the power of literacy is matched by Tadgell’s beautiful sun-washed watercolor illustrations.”
–Language Arts

“U.S. readers will get insight into a different culture, where poverty holds people back and schooling is a privilege–one that can make all the difference. Another interesting aspect of the story is that a child is helping lead his parents into modernity.”
–Booklist

“Elvgren effectively portrays the dilemma faced by a majority of small agrarian families in an impoverished and predominantly illiterate rural society. Soft watercolors in muted shaded of blues and greens offer the simple beauty of the countryside …Despite the difficulties, Elvgren presents a positive look at a struggling part of the world.”
–Kirkus Reviews

“[The Text] … is written in a flowing, gentle, almost poetic manner. This is a terrific book to use as a springboard for reading motivation as well as for Social Studies. The author’s note at the end explains the economic and social structure of rural Haitian society.”
–Library Media Connection