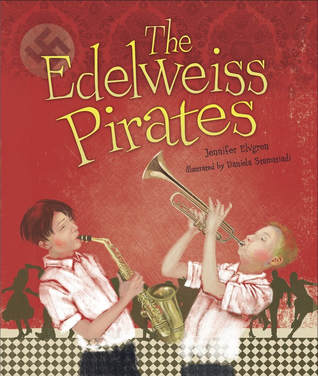 ​Summary
In 1938 Germany, playing and dancing to jazz music is forbidden. The Hitler Youth patrol the night streets looking for anyone who breaks the rules. Albert is a member of the Edelweiss Pirates, a secret group of young people who defy the Hitler Youth. They play forbidden music and work against the Nazis any way they can. Albert’s younger brother, Kurt, loves jazz and longs to be a Pirate, too. Although he’s too young to be an Edelweiss Pirate, Kurt can still find a way to take a stand.

September 2018, Kar-Ben Publishing. Ages 8-12. ISBN: 9781512483611​
Click Here for The Edelweiss Pirates Trailer
Reviews
​"Elvgren makes the events personal and immediate for modern readers, who may have limited knowledge of the Holocaust and the war. A
powerful homage to young activists."
–Kirkus Reviews

"Like Elvgren's THE WHISPERING TOWN, this Jewish story is told from the perspective of non-Jews. The author uses music to demonstrate the increasing loss of freedom suffered during the Holocaust. Her book also weaves a tightly crafted narrative, using first-person point of view and present tense, based on the powerful picture-book formula of threes."
–Jewish Book Council

"Kurt and his older brother Albert, who are not Jewish, live in Nazi Germany. Albert resists the Nazis through a group known at the Edelweiss Pirates (an actual resistance group), which Kurt, to his dismay, is too young to join. Both boys are musicians, and both enjoy forbidden music, namely, jazz, which they play and listen to any time they can. Kurt's best friend is Fritz, who is Jewish. When the boys can get together, they, too, like to play jazz, Kurt on his trumpet, Fritz on his saxophone. In school, Kurt is ashamed of himself for not standing up in class for Fritz. Then, at a school band concert, Kurt finds a way to resist and to stand up to the Nazis. It's an in spring story, enhanced by illustrations that suit it well."
–Chicago Jewish Star

"At a time when most people were afraid to speak out against the injustices and cruelties they were witnessing on a daily basis, Kurt is an inspiring character, finding his voice and means to protest. This is indeed a picture book for older readers that should resonate strongly with them even today."
–The Children's War

"The Edelweiss Pirates, a group of courageous young Germans, defy Hitler with anti-Nazi acts and nocturnal street concerts, where they play music deemed impure by the Third Reich. Kurt, a jazz lover and trumpet player, is too young to join them but not too young to drown out Richard Wagner’s music at a school concert by playing the “St. Louis Blues.” The pirates were an army of 5,000 idealists who were often beaten and imprisoned—some were executed. A tale of courage well told."
–Hadassah Magazine

"In the run-up to the Second World War, a teenage movement called the Edelweiss Pirates was born. Members dropped out of school, grew their hair long, swing-danced and played forbidden jazz. Elvgren’s picture book features Kurt, who longs to become an Edelweiss Pirate like his big brother. Kurt, whose best friend is Jewish, finally dares to perform his own act of jazz resistance. Illustrator Daniela Stamatiadi has an eye for retro pattern and a painterly way with capturing human emotion."
–The Jewish Chronicle

"Set in Germany in 1938, this story’s young narrator, Kurt, longs to be an anti-Nazi activist like his older brother, who is a member of the resistance group, the Edelweiss Pirates. Their risky activities include distributing anti-Hitler leaflets, painting over Nazi symbols, and playing prohibited Jazz music. Kurt’s brother insists Kurt is too young to join the group, so privately, Kurt and his Jewish best friend, Fritz, enjoy playing banned Louis Armstrong songs at home together. When Kurt witnesses the abuse Fritz suffers in school for being Jewish, he pulls off his own small, but significant, act of resistance that shows his solidarity to his friend and proves his courageousness to his brother. With warm illustrations in muted tones that wonderfully compliment the sense of the era, this powerful story illuminates a lesser known branch of Nazi dissenters, as well as the difference that one person’s actions can make. An author’s note further explains the historical facts of the Pirates and their efforts to help Jews."
–Association of Jewish Libraries